The importance of date, time and currency formatting in translation

The importance of date, time and currency formatting in translation

One aspect that seems to be overlooked but is extremely important in translation is the formatting of date, time and currency. These must be written correctly for the targeted audience and in order to do this, a translator must not only understand the correct way of writing these in the target language, but must also have a clear understanding of how they are written in the source language. This can be challenging at times.

Date format can sometimes be confusing. If an event takes place on 08/09/2022, would you turn up on the 8th of September or the 9th of August? The format of Day/Month/Year is widely used around the world. This date formatting is used in Africa, Mexico, Oceania, a big part of Asia, most of Europe and throughout South and Central America (with the exception of Belize). The format Month/Day/Year is mostly exclusive to the United States. While in certain parts of Asia, the correct date formatting would be Year/Month/Day. A slash or a dash generally separates each component. 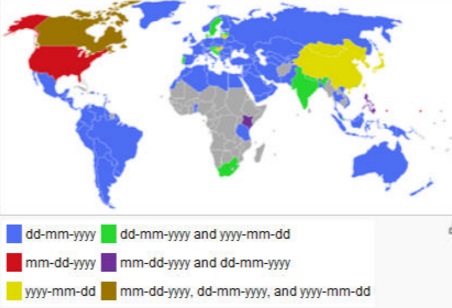 Formatting time properly is as important as formatting the date accurately. When translating and localising, a translator should always remember that some countries use the 12-hour clock where the day is divided into two – a.m. and p.m., whereas almost all countries use the 24-hour clock. The 24-hour clock in which 5 a.m. is referred to as 05:00 and 10 p.m. is 22:00 is often referred to as military time in the United States.

During the localisation process, a translator must always pay attention to the currency symbols. For example, most European countries use the Euro € whereas in the United Kingdom one must use the pound sterling £ and the dollar sign $ in the United States. When dealing with numbers, it is also important to pay special attention to the decimal points and whether a particular country uses a comma or a dot, which varies greatly throughout the world.

In the past, scholars around the world were not as connected as they are today and therefore, different units and measuring standards have evolved independently. This could have serious repercussions if not translated/localised properly. A perfect example of this is when NASA lost a spacecraft, the Mars Climate Orbiter, in September of 1999 which burned and broke into pieces. The engineers used the metric system whereas the company that built the spacecraft used the imperial system, and in a sense, the spacecraft was lost in translation.